With the development of LED technology, there are not only many LED horticulture
plant factories abroad that can realize mass production of plants, the Chinese market is also slowly emerging. So, with the world’s fourth largest plant factories, what is the development prospect of China’s LED plant lighting market? In which direction will plant lighting develop? Shenzhen LED PCBA factory interviewed a number of senior industry experts and corporate executives on this issue, and conducted a deep and systematic interpretation.

However, it is reported in the industry that the price of artificially cultivated vegetables using LED plant lights is several times more expensive than traditional sunlight-illuminated vegetables, the initial investment is too high and the investment cycle is long, which is a certain expand restrict to the large-scale promotion of the market. There is a voice "Limited Development of LED Plant Lighting Market" . The author goes deep into the market, through understanding the status quo of the domestic LED horticulture lighting field, objectively analyzing its development prospects, and trying to provide enterprises with the future development direction of LED plant lighting. 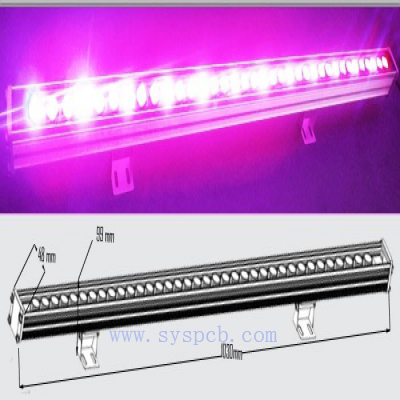 Judging from the current agricultural planting domestic and abroad, soil pollution is becoming more and more serious, the degree of desertification is also expanding, and more and more people pay attention to food safety issues. Under the premise of these problems, LED Plant lighting will solve some of the current problems to a certain extent.

For example, LED plant lamp lighting can realize soilless cultivation, which can reduce the problem of soil damage or poor soil resources in some areas, and can also change the current plane planting methods can achieve three-dimensional planting, which will completely subvert the current agricultural planting methods and will have epoch-making significance. Therefore, LED plant lighting will have more and greater potential for development. Agriculture itself is a long-term work, and related technical research and experiments also require a certain period of time. This is an inevitable process.

Advantages of LED plant lights:
1. Standard power socket connectors for drivers or cooling fans.
2. An environment with red and blue wavelengths which is suitable for plant growth.
3. Compared with other ordinary lighting equipment, the LED plant lamp has a gentler lighting, and will not scorch the seedling plants.
4. Compared with other plant lighting, it can save 10%~20% of the electricity.
5. Blue light can promote plants to grow taller, and red light can make plants bloom and bear fruit.