Technical
How to check short circuit of a circuit board during manual soldering
Identify the polarity of electronic components during PCBA processing
Means Which Can Prevent Component Shifting in SMT Processing
Skills of PCB prototype manual soldering
Reasons for the shift of Components in the SMT Process
Seven Types of PCB Probes
What Should Be Paid Attention to in Layout of High-frequency PCB
Precautions for PCB CCL Selection
Advantages of LED Plant growth light
Advantages of using LED grow lights to grow industrial hemp
Detailed explanation of PCB manufacturing process and precautions
Detailed explanation of PCB manufacturing process and precautions
How to draw multilayer PCB on Altium Designer
Three basic elements of interference and how to suppression them.
Decrease interference between digital circuit and analog circuit
SMT Component Placement Process Of Parts : Manual Placement
SMT factory incoming PCB material inspection
Basic concepts commonly used in PCB design
Ideas and principles of High speed PCB layout
Component layout rules and safety distance considerations
SMT assembly process quality specification
5 points in PCB layout
Professional interpretation of SMT
Advantages and disadvantages of different PCB surface treatment
Special process in PCB prototype
Why the via hole become open after component assembly
Keep the cost of the PCB as low as possible
what are the causes of PCB board heating radiation problem
Pad size and via diameter dimensions consideration in PCB prototyping
How to Judge the Acceptance of PCB Quality
Which Color Circuit Board Sells the Most Expensive
Method to Solve the Noise Interference of Power Supply on High-frequency PCB Board
Disassembly Skills of Chip Components on PCB
What Factors Should Be Considered in the Selection of High-frequency PCB CCL
How to Place Special Components during PCB Layout
What Are the Functions of Capacitors in Circuits?
Testing Techniques for Common Electronics Components
What to do if There is a Short Circuit on the PCB
Desoldering Principles and knowhow during PCBA Processing
Black Oxidation of the Inner Layer of the Multilayer PCB
How to Ensure the High-performance Design of PCB
What Is the Printing Process of SMT Solder Paste?
PCB without fiducial mark, Is There Any Way to do SMT for It
What Are the Benefits of Reserving Break-up Tab for PCB Production
How Does SMT Affect PCB Production Time and Speed It Up
Classification of PCBs from three aspects
Common Problems and Solutions for Dry Film pasting during PCB Manufacturing process
Several Elements to Inspect after PCB Design
What is a halogen-free circuit board?
What Do Capacitive Coupling and Decoupling Mean?
What Are the Differences Between PCB Paste Mask and Solder Mask?
How PCBA Is Packaged and Shipped
How long can PCBA finished products be stored?
What Are the Differences and Relations Between PCB, PCBA, and SMT?
PCB Baking Specifications
PCB "Solder Mask Tenting" and "Solder Mask Opening"
Five reasons for PCB deformation and six solutions
Importance of first article inspection of PCBA board
Temperature zone standard for SMT reflow soldering
Small and medium volume PCB manufacturers in China
The main reason for PCBA cleaning
For power filter, the more capacitors, the better?
What does PCBA programming mean?
Content of PCB incoming testing
What conditions must be met for PCB circuit board soldering?
What is Blind via and Buried via
PCBA Manufacturers Temperature and Humidity Sensitive Components Management
Why choose Shenzhen SMT processing factory?
How long does it take to calculate the quotation for PCBA manufacturing?
Introduction of PCB design clearance requirements
Explanation of BOM, DIP, SMT, SMD
Introduction of the process of PCBA prototype
How to prevent pseudo soldering or cold soldering defects in PCBA manufacturing?
Factors that affect the Price of FPCB
What information is required for SMT processing at PCBA factory?
Skills of using 0ohm resistor in PCB design
How to select a PCBA manufacturer
SMT processing solder joint quality inspection
Characteristics difference between immersion gold PCB and gold plating PCB
Common malfunctions of Circuit Board Caused by Moisture
A Few Rules about PCB Panelization
Compare of multi-layer PCB with single/double layer PCB
Why do we need to introduce so many subdivided GND
Difference between immersion gold boards and gold plating boards
Aluminum PCB structure
Classification of different GND in circuit
Why PCB baking is necessary during manufacturing process 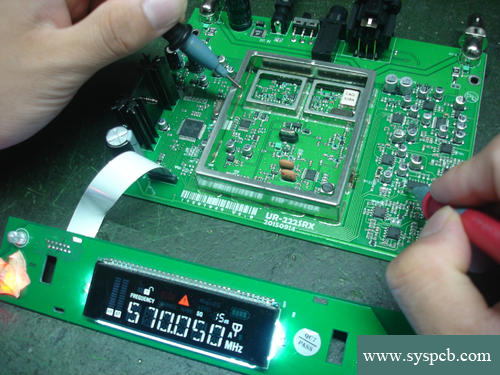 First:
Open the PCB diagram on the computer, light up the short-circuited network, and see which place is closest to it and is most likely to be connected. Pay special attention to the IC internal short circuit.

Third:
Be careful when soldering small size surface mount capacitors, especially power filter capacitors (103 or 104), which are large in number and easily cause a short circuit between the power supply and the ground. Of course, sometimes with bad luck, the capacitor itself is shorted, so the best way is to test the capacitor before soldering.

Fourth:
If it is manual soldering, develop a good habit. Firstly, visually check the PCB board before soldering, and use a multimeter to check whether the important circuits (especially power and ground) are short-circuited; secondly, after each chip is soldered, use a multimeter to measure whether the power and ground are short-circuited; in addition, do not throw the soldering iron at will during soldering . If solder tin is thrown on the solder leg of the chip (especially surface mount components), it is difficult to find it.

Fifth:
If there is a BGA chip, since all the solder joints are covered by the chip and cannot be seen, and it is a multi-layer board (above 4 layers), it is best to separate the power supply of each chip during the design and connect it with magnetic beads or 0 ohm resistors. In this way, when there is a short circuit between the power supply and the ground, it is easy to locate a certain chip by disconnecting the magnetic bead. Because the soldering of BGA is very difficult, if it is not automatically soldered by the machine, a little carelessness will short-circuit the adjacent power supply and the ground two solder balls.

Sixth:
If a short circuit is found, then take a board and cut the circuit (especially suitable for single-layer/double-layer boards). After cutting, energize each part of the function block and eliminate it part by part.

The above is the method we can do when there is a short circuit. Hope it will help you!